Comet Wild 2 from the Stardust Mission (Image from JPL. Taken by Shigemi Numazawa).

I know some of you may be wondering why I’m writing about comets for a Meteorite Monday post. The answer is that comets and meteorites tell us about the formation of the solar system. Meteorites come from asteroids that record the history of the inner solar system and comets tell us about the evolution of the outer solar system. And I know next to nothing about comets, so blogging about it is a great way to diminish some of my ignorance.

What exactly is a comet? A common description is that they are galactic snowballs with rocky material incorporated into the nuclei  (body). Conversely, some comets can be described as mostly rocky with some form of frozen gas and water mixed into the nuclei of the comet. Regardless of the description you can see the common thread: a small solar system body composed of varying amounts of ice, water and rocky material. At one point it was thought that comets and asteroids had unique mineralogies, but samples returned by  NASA’s Stardust mission to Comet Wild 2 tell us that both objects may have more in common than previously thought (1).

Comets are classified according to the eccentricity of their orbit. This simply refers to how elongated their orbit is in relation to the sun. A short-period comet, such as Halley’s Comet, have an orbit that roughly follows the galactic plane and orbits the sun every 200 years or less. Long-period comets have a highly elliptical orbit that all but removes it from the solar system. For example, Comet West, at its furthest from the Sun can apparently get up to 70,000 AU (2). I say apparently because the only good source of information I found on this subject is in Wikipedia. So, take it with of a grain of salt. 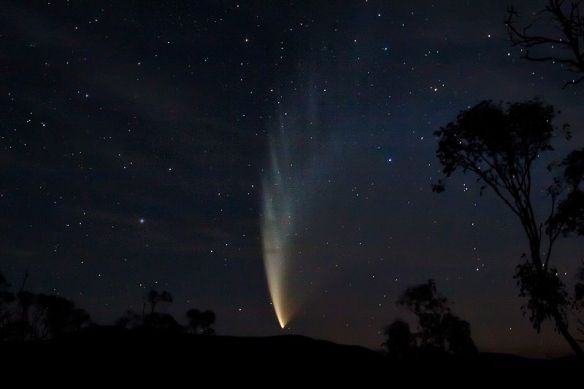 Comet McNaught. This is an example of another long-period comet. (Image from Wikipedia. Taken by Fir0002/flagstaffotos)