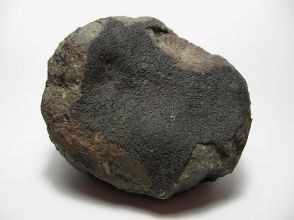 A 520 gram (~18 ounce) piece of the Allende meteorite. (Image from Wikipedia)

All right everyone, say it with me: Ayendeh. The name of this beauty is Spanish so those double L’s are pronounced with a “Y” and not a hard “L”. Think of it like the word tortilla.

Now that we have the pronunciation out of the way, let’s get to the good stuff!

Allende is recognized as one of the most well studied meteorites in the field of meteoritics. It’s a stony meteorite of the carbonaceous chondrite family and is full of chondrules, calcium-aluminium inclusions (CAI’s) and even contains pre-solar grains. In short, it’s a wet-dream come true for those that get their kicks out of deciphering the nursery years of our solar system and the conditions that persisted at that time. 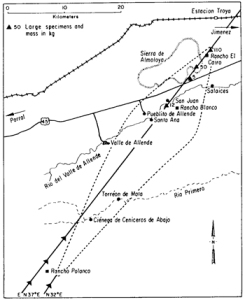 The area within the dotted lines represents the Allende strewn field. It's basically the rubble pile left over from Allende breaking apart as it came through the atmosphere. (Image from Encyclopedia of Meteorites)

Allende came crashing to the earth in February of 1969 in the small Mexican village of Pueblito de Allende. Its fall is significant in that 2 metric tons of the stuff have been recovered from the strewn field. Carbonaceous chondrites such as Allende represent about 5% of the current meteorite finds, so finding 2 metric tons gives scientists a relatively large amount of material to play with.. er, study. 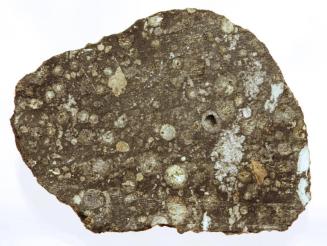 The cut side of the Allende meteorite. The white, irregular shaped ("fluffy") inclusions are CAI's. The round inclusions are chondrules. (Image from the Encyclopedia of Meteorites. Taken by Rene Schmit.)

One of the most notable features in Allende are these large, bright inclusions called CAI’s. These are believed to be one of the first products to condense out of the solar nebula and have been dated to form about 1-5 million years after the formation of the solar system. CAI’s are composed of calcium and aluminium rich minerals such as melilite, corundum and perovskite. These elements condensed out of the solar nebula at temperatures around 1600 K

And then there are the presolar grains. As you’ve probably guessed, these grains formed before our solar system and contain isotopic anomalies that attest to their extrasolar origins. Such grains include nanodiamonds, graphite, corondum, silica carbide, and silica nitride. Some of these grains, such as the nanodiamonds only form at high pressures produced by supernovas from red giant stars (1).

In terms of metamorphism, Allende is relatively unprocessed. It falls under the designation of CV3 which means that it’s chemically related to the Vigarano chondrite (CV) and the 3 means that it’s relatively unaffected by aqueous alteration. Its chondrules still contain glass and water hasn’t moved minerals from the chondrules to the matrix (or body) of the meteorite (Meteoritical Society Database). Don’t stress too much over those details though. That’s something I plan on covering in later posts.