The Molalla River at dusk

This week my partner and I had the chance to visit the Molalla river with Holly, a close friend of ours. She grew up close to the river and told us stories of her time here as a kid. The one I found most fascinating was about the major flooding in 1996 that pretty much changed the dynamics of the Molalla. As a tributary of the Willamette River, the Molalla was adversely affected by the flood of 1996. This was that once a century flood that nearly inundated downtown Portland, Corvallis, Salem, Eugene and smaller towns along the Willamette. 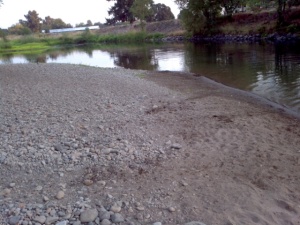 The Molalla River from the opposite direction. Notice the large cobbles the further up the beach from the river?

Prior to the flood there used to some small rapids in the direction of the grassy area on the water. I’m not a hydrologist, so I can’t really elucidate as to how the rapids were affected by the flood waters. I can speculate that some large rocks, portions of the river bank and some trees were probably displaced from along the river bed and that somehow changed the dynamics of the river. What I found really interesting was the juxtaposition of the cobble sized sediments against the sand particles closer to the water. I imagine those cobbles were deposited by the flood when the water had the energy necessary to move sediment of that size. The sand was deposited at times when the Molalla didn’t have enough energy to keep the particles suspended and carry it further down river. Like I said, I’m not a hydrologist so my interpretation is probably flawed. Suggestions anyone? (I’m looking at you Lockwood and Anne 😉 )

5 thoughts on “The Molalla River, Oregon”