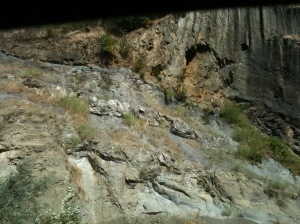 *Due to some formatting issues, I’ve had to move some of the pictures to the end of the post. Hopefully I can get this fixed soon.*

Before I dive into this post, I just want to thank the geo community on Twitter for their warm welcome into the geoblogosphere. As an undergrad it’s humbling to be able to communicate with and learn from the seasoned veterans of the geology field. Thanks again!

So, for todays post I’ve decided to share a few more pictures from my trip to southern Oregon. All the pictures were taken with my iPhone, so the quality isn’t the best, but they do give a good idea of the geology of the area.

The first picture I’d like to start with is what I believe to be a fault line that runs through Eugene. I noticed it as we were going southbound on I-5. I wanted to actually park the car and take a better picture, but traffic was a bit too dodgy to want to stand on the side of the highway. I think the bottom layer consists of sediment (sandstone/mudstone?) with the top layer composed of columnar basalt. If you click on the image and then click again to magnify, the far left of side of the picture shows that the layer of sediment starts off fairly horizontal prior to diving underneath the basalt formation. The only thing that makes me doubt that this could be a fault line is the lack of displacement between the two beds. Or in other words, there is no “mixing” between the differing layers of strata. If it’s not a fault line, then it could be standard uplift w/deformation. 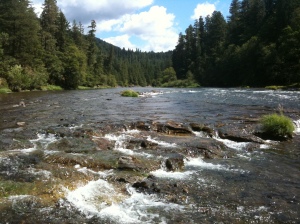 It rises in the high Cascades, issuing from Maidu Lake at elevation of 5,980 feet (1,823 m) in the Mount Thielsen Wilderness, along the Douglas-Klamath county line approximately 70 miles (113 km) east of Roseburg. It follows a serpentine course down from the Cascades, westward along the southern side of the Calapooya Mountains. Its upper course passes through the Umpqua National Forest, past Toketee Falls and Steamboat, where it receives Steamboat Creek from the north. It receives the Little River from the south at Glide and joins the South Umpqua from the east approximately 5 miles (8 km) northwest of Roseburg to form the Umpqua.

The North Umpqua runs along OR 138 and is one of my favorite drives on this side of the Cascades. Follow it far enough and you’ll come to Diamond Lake and then eventually Crater Lake.

As was mentioned in the Wikipedia article, one of the North Umpqua’s tributaries is the Little River. My partner’s grandparents actually live right on the Little River so, I’ve had the chance to see some of the cool rocks in the river bed. One of the most fascinating things along this stretch of the river are the large outcrops of talc that are exposed along the river bank. I’ve read that talc is a metamorphic mineral, so does that suggest formation at depth, with exposure through uplift and fluvial erosion?

The last picture is that of the Colliding Rivers. This is where the Little River drains into the North Umpqua. During the summer time, when the river is low,  it’s a nice little swimming hole. However, you wouldn’t want to fall in during the winter when the flow is at it’s highest. 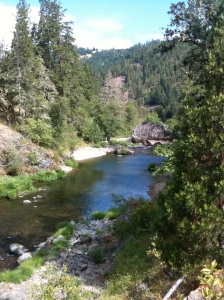 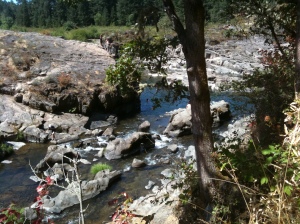 Colliding Rivers- Confluence of the Little River and North Umpqua

2 thoughts on “More pics from Glide, OR.”